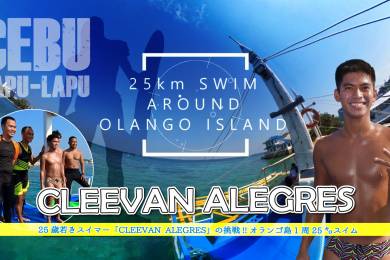 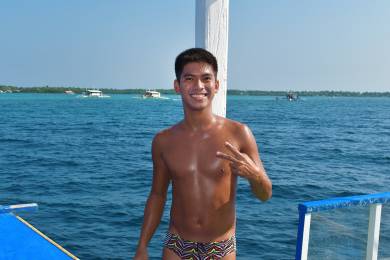 Challenge of the open water swimmer Cleevan Alegres and his goal.

Cebu, Philippines> Cleevan Alegres, 25-year-old born and raised in Mactan Island, Lapu Lapu City, plans to swim around Mactan Island on April 24, 2021 .He decided to do this feat two years ago in 2019. which is a memorable year for him. Also, this year marks the 500th anniversary of the Victory of the Mactan chieftain LapuLapu against Ferdinand Magellan.

It is estimated that it will take about 42km with at least 18 hours to swim around Mactan Island. Alegres will be also accompanied by a stand-up paddler to ensure his safety while swimming. He would also be provided with liquid food and protein bar along the way.

Why does he take on a tough challenge?

Alegres is a longtime volunteer in cleanup activities. He has lived by the sea since childhood, during the interview, he said that "the sea in front of him now was a complete different sea than it is before."

Cebu Mactan Island is a popular area for tourists, and it seems that the sea became dirty as the number of tourists increased. After the lockdown due to the influence of the covid19 in March 2020, it seems that the sea has become "temporarily clean" due to restrictions on the entry and exit of people, but it seems that garbage is increasing again recently.

Private beaches are kept clean, but public beaches carry plastic bottles and vinyl by the waves.

His goal is to make more people aware of the problem of marine pollution from plastic waste .

Alegres departed from Mactan Shrine at 9 pm and arrive at Maribago at 3 am. He swam for about 6 hours. He expected some strong waves, but he said the waves were calm.

Then, on April 4, 2021, Alegres attempt to go around Olango Island as a practice for his 40km open water swim.

He departed from Santa Rosa Port in Olango Island around 3:30 pm. As the sun went down, he continued to swim in the dark and arrived at the point where he started around 3:30 am the next morning (April 5).

Check out the video of the event!

Around Olango Island, a few swimmers, including a stand-up paddler and a triathlete, accompanied him. Alegres swam about 25km in distance .

Despite the bad conditions of the waves and tides on that day, he finished "25,420 meters swimming in 9 hours 59 minutes 48 seconds" according to his own records .

In an interview right after his swim around Olango Island

Isn't it scary to swim in the dark? What do you think when you are swimming?

➡ I'm not afraid to swim in the dark. When I'm swimming, I count numbers, think about school, and think about various things while swimming.

Are you tired of swimming for a long time?

➡ I'm tired, but I keep swimming to reach my goal.

What are your goals?

➡ I want to clean the sea, which is also the reason for this challenge. First of all, I asked the mayor to install plastic waste recycling equipment in the Maribago area first, at least. After that, I would like to install it in other barangays other than Maribago.

After the interview, anchovies came into my mouth while swimming and answered with a laugh, "I ate two anchovies."

2021 marks the 500th anniversary of the victory of Mactan in the battle between the Portuguese explorer Ferdinand Magellan and his crew and Mactan chieftain Lapu Lapu and his men in 1521.

To commemorate the 500th anniversary, a grand event will be held at Mactan shrine on April 27, 2021, and the President of the Philippines, "President Rodrigo Duterte," will also attend. The success of his challenge will make this event even more exciting.

Mayor Ahong Chan of Lapu Lapu City has expressed his continued support for Cebuano swimmers and hope this challenge will be successful.

We sincerely support Mr. Cleevan Alegres' activities for environmental pollution and plastic waste recycling, and are looking for sponsor companies to support the Challenge Swim on April 24th. The type of business does not matter. If you are interested, please contact us using the inquiry form below.