VR360 Let's take a virtual tour inside the shopping mall of Cebu! 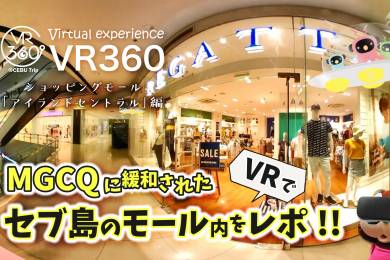 VR360 Let's take a virtual tour inside the shopping mall of Cebu!

Currently, Cebu Island is still under the quarantine called MGCQ (Modified General Community Quarantine) due to the influence of the coronavirus.

MGCQ is a relaxed quarantine level in the quarantine classification of the Philippines, but it seems that it will take some time before it becomes normal (new normal).

Cebu Island is a popular tourist destination that many foreigners, including Koreans and Japanese, visit for sightseeing and study abroad.

Nowadays, many stores have closed due to the 5 month long lockdown, and there are strict restrictions on entring a specific place, so it is not as lively as before.

Finally, in September, the tourism industry and massage (SPA) businesses became available, but, sadly, most of the shops have already closed.

However, there are places where we are resuming business for the local market, and even under these circumstances, we can see stores that are newly opened and some are currently under construction.

This time, I used VR360 to shoot the inside of a shopping mall near New Bridge, which connects Mactan Island and Cebu Island, where the international airport is located.

If you have visited before, you may be particularly interested in the current situation.

Let's take a walk in the store with VR360 virtual tour!

* You can enjoy it more realistically by wearing VR goggles. Of course, you can also view it from your computer or smartphone. If you move the place you want to see with the mouse left, right, up and down, you can look around freely!

Took the shot of the mall in early September.

Rules for entering the mall and current situation (as of September 17, 2020)

There were several restaurants and cafes around the 1st floor (outdoor establishments) but currently only bo's coffee, the most famous coffee shop in the Philippines, and the seafood restaurant Pizza Hut are open.
The interior of the 1st floor contains Super McDonald's, coffee shops, drug stores, etc., and most of them are open except for the exchange office.

However, the restaurant is open under personnel restrictions (70% capacity).

* While the Philippine government wants to promote digitalization, the system has not been established, and the response at the field level cannot catch up and it is a analog work.

The food court on the 3rd floor is open with 3 stores only.

President Rodrigo Duterte further declares a disaster situation for the entire Philippines on September 18 due to the health crisis caused by the new coronavirus (Covid-19) and the increasing trend (September 13, 2020 to 2021). Announced an extension of one year (until September 12) .

The Department of Transportation of the Philippines announced on September 12 that it will gradually reduce the social distance in public transportation such as railroads from the 14th.

As a measure to prevent infection with the new coronavirus, it was necessary to leave a space of 1 meter between passengers, but first reduced it to 0.75 meters.

The social extension recommended by WHO is currently 1 meter

Announced that the distance will be gradually reduced. However, wear a mask and face shield.

So it was withdrawn today.

Compared to the situation immediately after the lockdown, the situation has gradually eased, but since foreigners cannot enter the country, most of the stores are closed or except for local target stores.

On the other hand, now that most businesses are allowed, traffic is gradually increasing, and at some hotels, surprisingly many day-use guests are enjoying their leisure time.

It is a frank impression that there are surprisingly many Filipinos who can afford even in this situation.

Changes before and after the Covid19

Feeling that it has changed personally

Toilet paper and hand soap, which were previously found only in hotels, large facilities, and restaurants for tourists, are always available at local supermarkets and places that did not exist before. This is a good change!

In the past, traditional three-wheeled motorbikes called tricycles and jeepneys were the main means of transportation, but now electric and solar buses and large buses are increasing. Considering the problem of exhaust gas, we can understand the movement toward the abolition of jeepneys, but I would like you to keep the traditional jeepneys and tricycles unique to the Philippines.

Until now, shopping is inconvenient without cash, but after Covid19, with the promotion of digitalization, the number of stores that accepts cashless payments (digital payment method) increases.

As a whole, awareness of hygiene is higher than before and by the time the ban on entry into the Philippines is lifted, I think that tourists will be able to travel even more comfortably.

I just hope that foreign tourists will be able to enter the country as soon as possible.